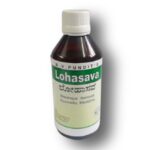 LOHASAVA is the best remedy for Iron Deficiency Anaemia. It is also useful in chronic fevers and diarrhoea caused due to faulty functioning of liver.

Your body needs iron to make hemoglobin, a protein in red blood cells that enables them to carry oxygen around the body. If your body doesn’t have enough hemoglobin, tissues and muscles won’t get enough oxygen to be able to work effectively. This leads to a condition called Anaemia or Anemia.

Faulty functioning of liver could also lead to Anaemia.

Although there are different types of anaemia, iron deficiency anaemia is the most common worldwide.

Symptoms of low Iron in your body, amongst others, could include unusual tiredness, loss of concentration, paleness in the lower eye lids, headache and dizziness, shortness of breath, heart palpitations, dry hair and skin etc.

Explanation of the chief ingredients of Lohasava are given below:

Haritaki is a tree native to South Asia and India. The dried fruit from this tree is extensively used in Ayurvedic remedies because of its potent qualities. It is said to support the Vata dosha and is one of three dried fruits that make up Triphala formulation. It is rich in vitamin C and is considered to have anti-inflammatory and anti-oxidant properties.

Vibhitaki: Also called Bhaira or Bibhitaki. It is very useful in dealing with gastric problems; keeps the digestive track clear and allows it to function at optimum levels. It is one of the three major components of Triphala.

Trikatu: ‘Trikatu’ is an Ayurvedic preparation containing black pepper, long pepper and ginger, which is prescribed routinely for a variety of diseases as part of a multi-drug prescription. It has been found to be useful in treating digestive anomalies, respiratory issues, inflammatory conditions, liver disturbances, various infections, sexual and reproductive oddities, hypercholesteremia, sluggish metabolism, and obesity.

Be the first to review “Lohasava- 200 ml” Cancel reply
No more offers for this product!